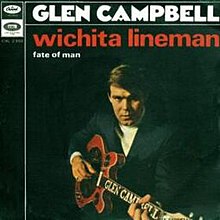 On this day in 1968, Glen Campbell started a five-week run at No. 1 on the US album chart with “Wichita Lineman.” The song, written by Jimmy Webb, was inspired by a trip through Washita County in northern Oklahoma. As Webb was driving, he noticed an endless line of telephone poles, each looking exactly the same as the last. He then saw a solitary lineman atop a pole in the distance and tried to imagine himself atop the pole and what he would be saying into the receiver.

Also, on this day in 1982, Michael Jackson’s album, Thriller, was released. The album sold one million copies worldwide per week at its peak. It generated seven singles, including “Billie Jean”, “Beat It” which featured guitarist Eddie Van Halen, and the title track which became an international hit. The album won 8 Grammy Awards in 1984, including Album of the Year. In 2009, Thriller was certified 29x platinum by the Recording Industry Association of America (RIAA). Still popular today, Thriller  sells an estimated 130,000 copies every year.